This section will guide you through the process of updating your device firmware, and help you get over situations where your device might not have been updated properly.

To update the Middle Remote, just download & install the latest version of Glue Software . Start Glue, connect your Middle Remote to your laptop and its firmware will be automatically updated if an update is available .

To update the APC-R, first make sure you have downloaded and installed the latest version of Middle Control .

Run Middle Control & connect the APC-R to your laptop using the Micro USB connection of the APC-R.

Next, the update process is slightly different on Windows and Mac OS.

You can download the latest version of Middle Control in the downloads section of the APC-R support page.
Supported OS : Windows 10 / 11

Head over to the Setup tab, the APC-R will show up. If it doesn't show up, please try to connect it with another micro USB cable.

If a firmware update is available, the "Update Now" button will appear. You can click it to begin the update process. The update process should last less than 30 seconds. 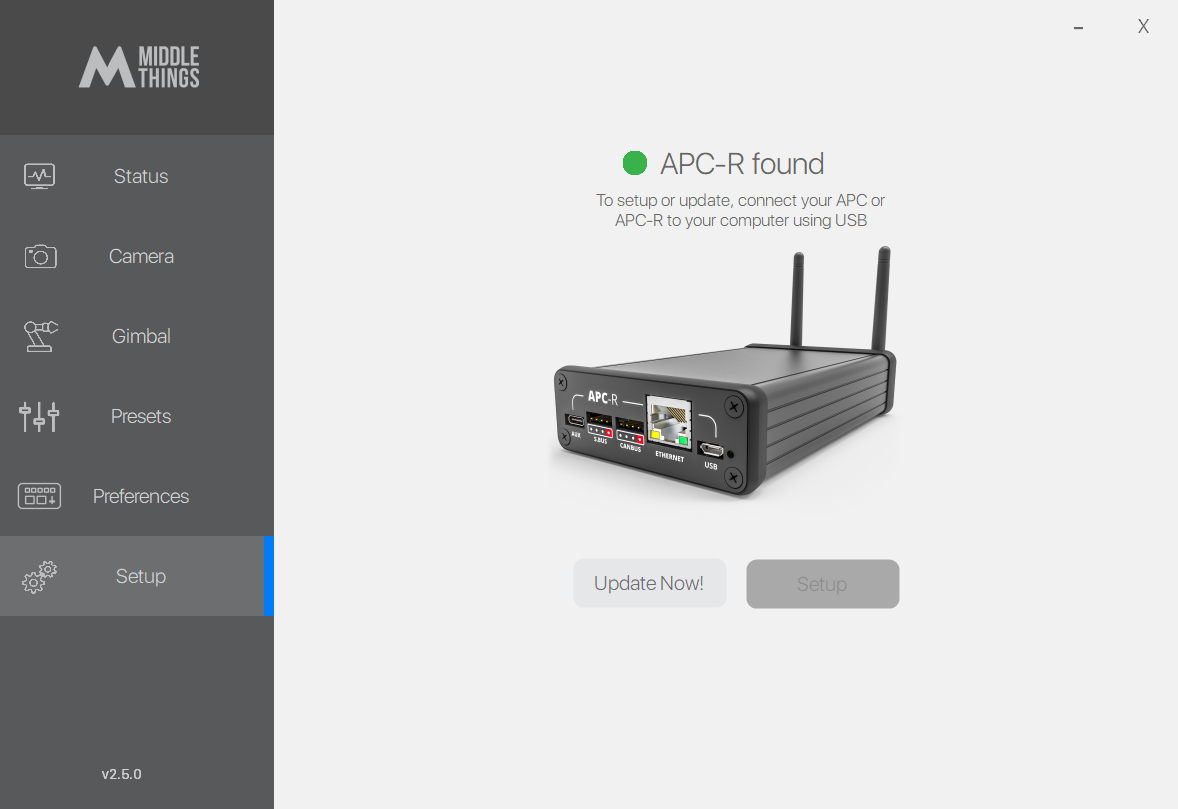 Head over to the Setup tab, the APC-R will show up. Click on its name. 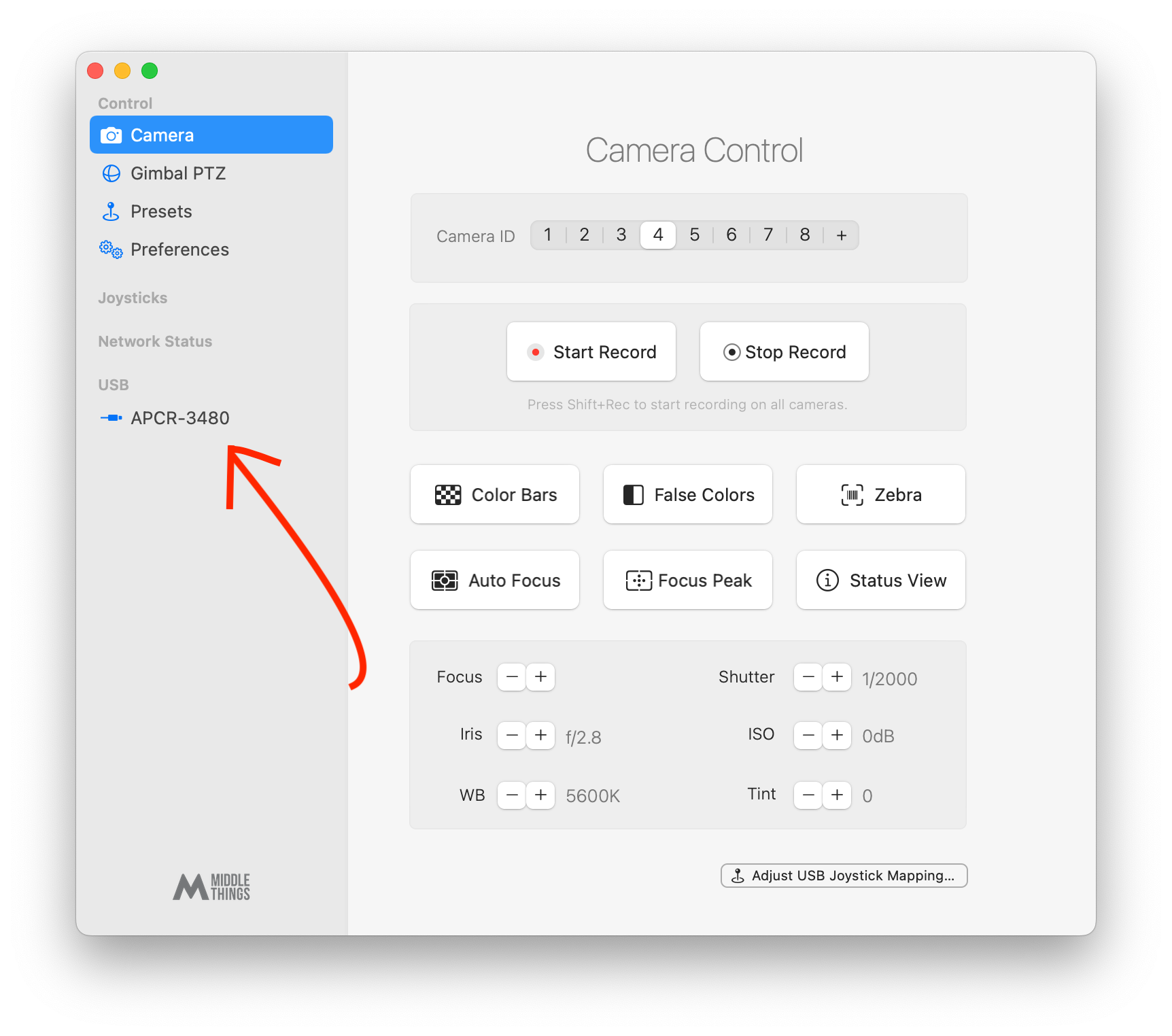 This will bring you to the APC-R setup page. You can now click the update button at the bottom of the page (which will only show up if an update is available for your APC-R ). 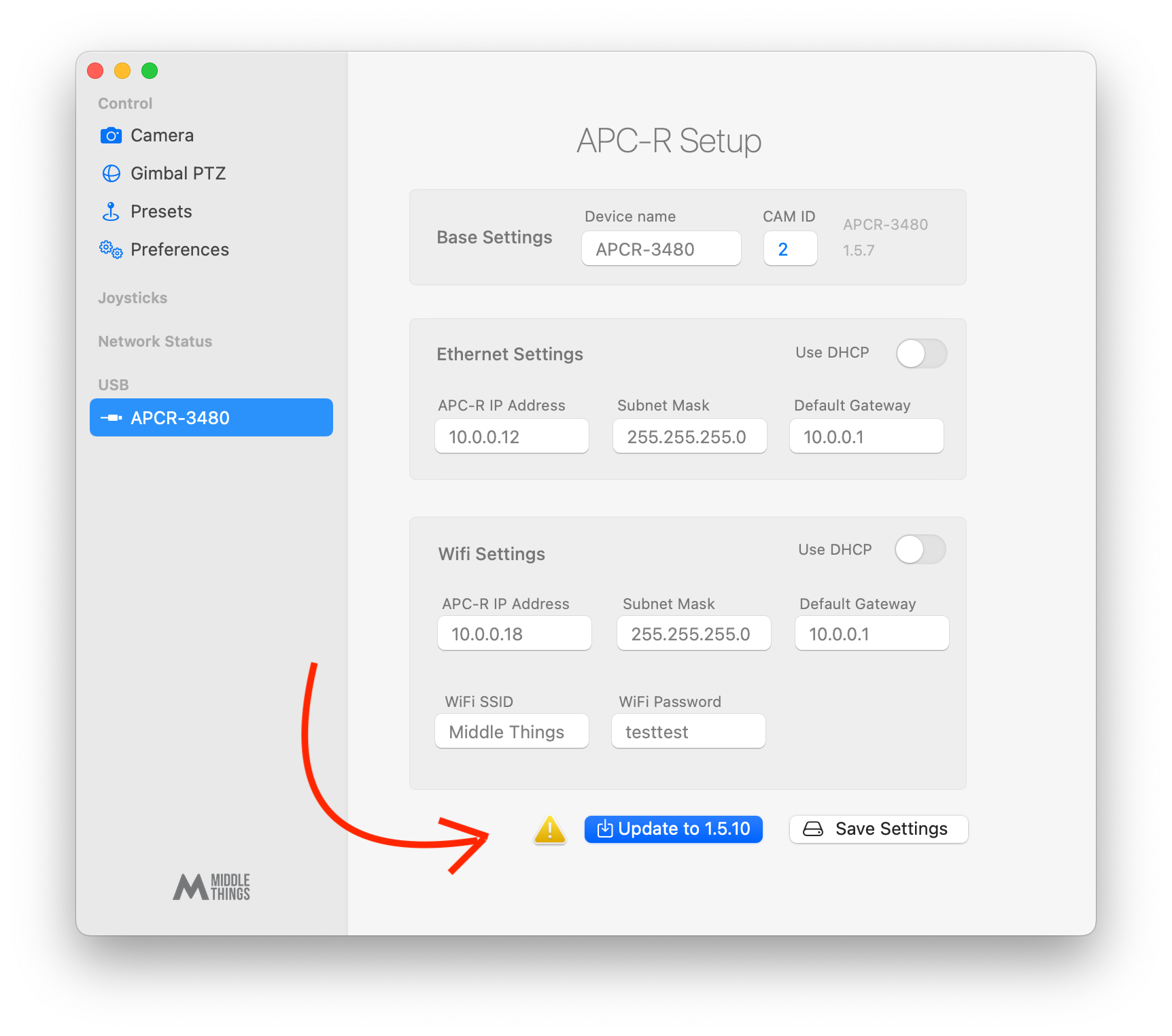 The update process should last less than 30 seconds. 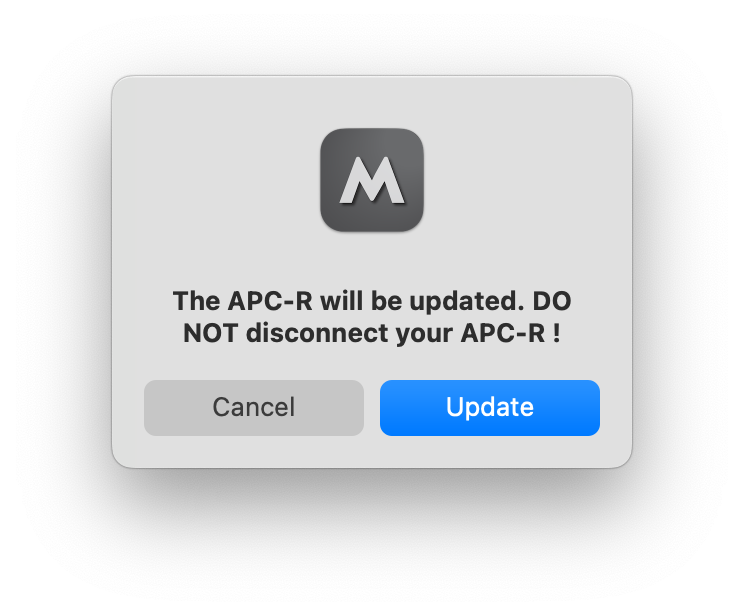 In some unfortunate cases, the update process might have failed, it could be due to a number of reasons :

If for any reason the update process has failed and your device does not seem to function properly anymore, we have implemented a "Force Update" method to force the update & get it back on track. It is available both on Mac OS and Windows. If you are unsucessful on one OS you could try on the other OS since the update process is natively implemented on each OS and works differently.

Head over to the Setup tab, the APC-R will show up. Now quickly left click on the APC-R at least 20 times. 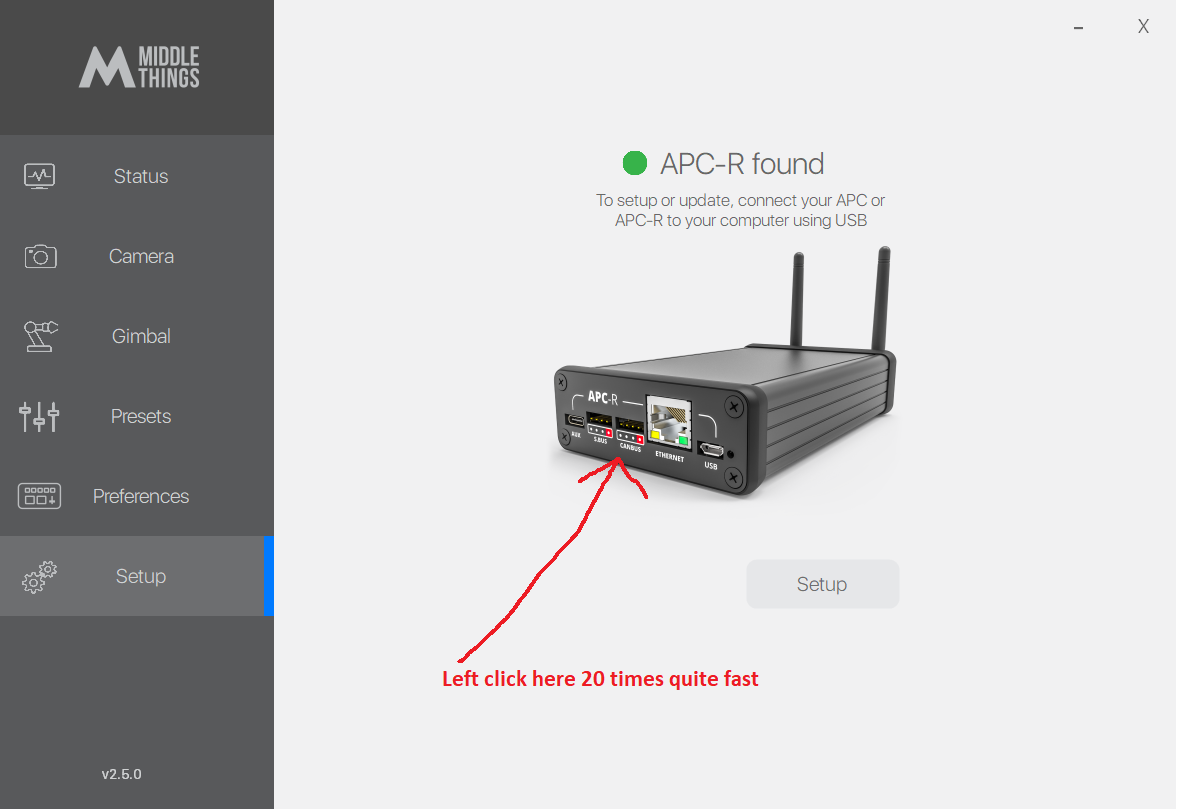 Additional buttons will pop-up. Now press the “Update Now!” button. It will reset & update the APC-R. 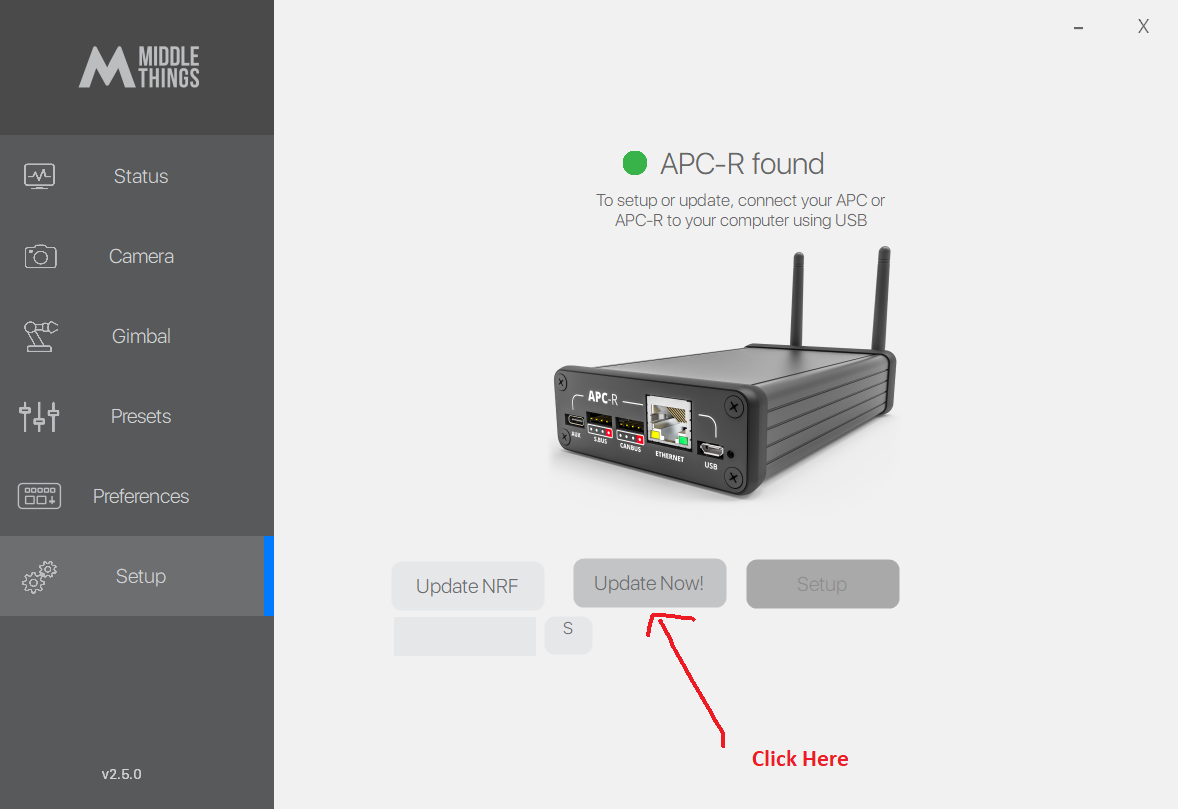 In some cases, the APC-R serial number will be erased and set to 0000 . In order to rewrite the serial number here are the steps you need to follow : 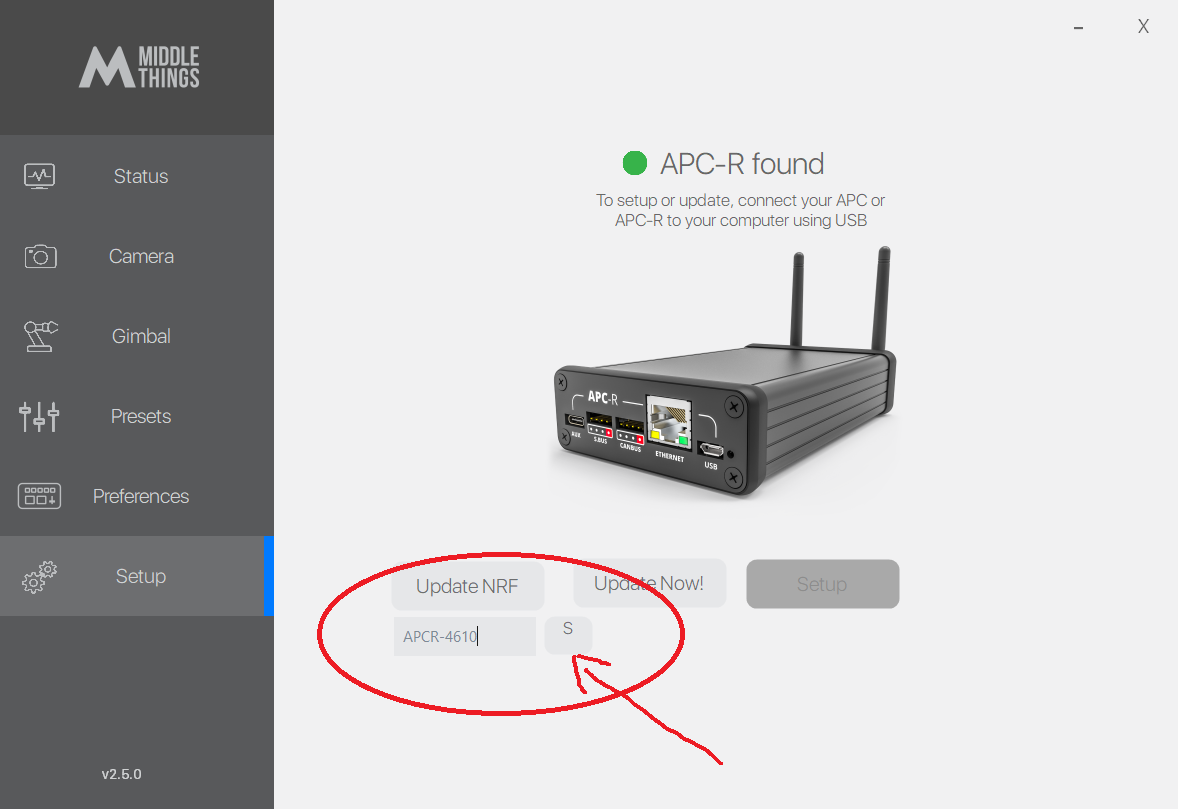 Make sure you are running Middle Control for Mac OS version 2.5.1 or above. (version shown at the bottom of the preferences tab)

Head over to the Preferences tab, and hold Shift + Option keys while clicking "Advanced Settings" button. A red "Force Update" button should show up. 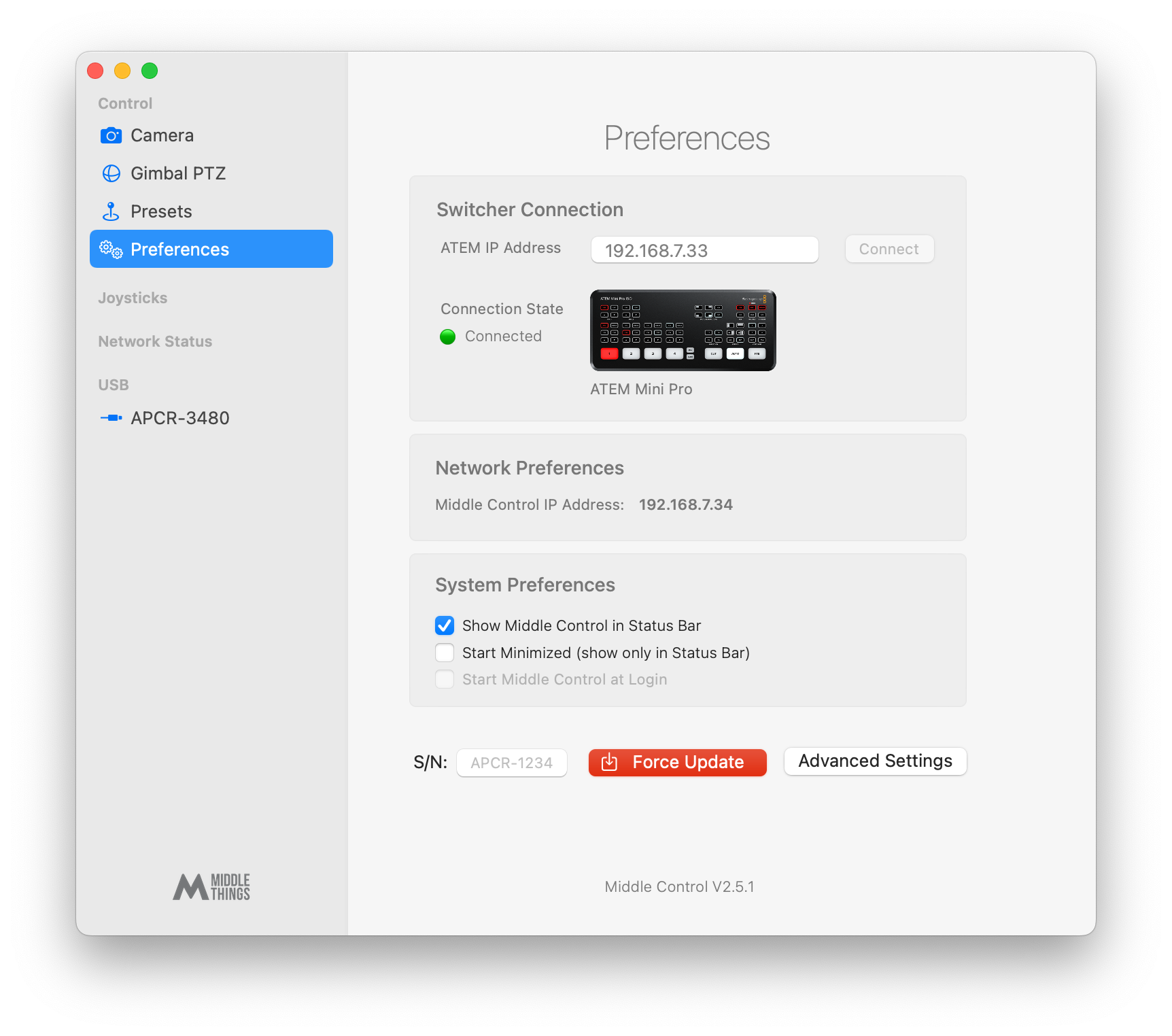 This should set your APC-R back on track with the latest firmware. If you are still running into issues, we would recommend trying another USB port of your computer and also trying on another computer / OS.

If all of that fails, please contact support at [email protected]